The concentric circle extends even father outward, as she was the “Tita”, the aunt to an extended generation of daughters, her nieces, whom she raised as her own and even more significantly, brought them here to the United States. She continues to be the matriarch and mother figure for decades of lifetimes beyond their own, to their children’ children, even as she lies in her hospital bed, the place where her nieces and sister gather around her now.

The strength of my mother’s love reaches past borders and generation, touching lives even as she lies still, her left side paralyzed, her heart still as full and loving now, smile filling her entire face. 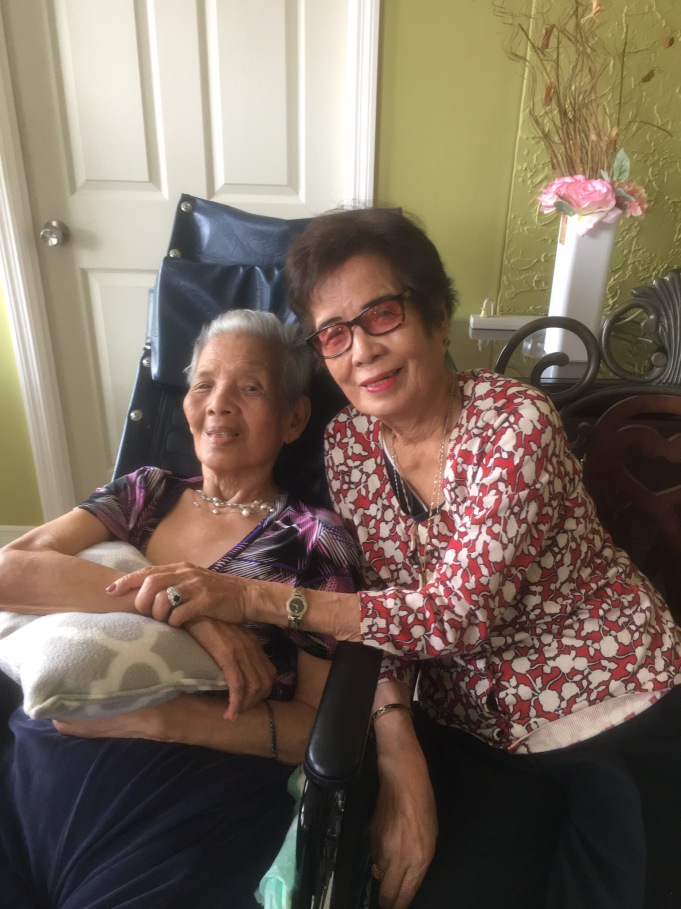 During this gathering of my cousins and aunt we shared a weekend of tears, hugs, laughter, and our favorite Filipino food, Kare Kare (oxtail soup), my aunt’s specialty. When my mother was admitted to hospice several weeks ago I had asked them to come to see her. Her Alzheimers was taking its toll on her memory and she was losing weight rapidly.

“Please come see my mother,” I asked them.

And they did. They travelled from the other coast to be here.  My mother’s only surviving sister of nine siblings, at 87, came to be at her side. My cousins, two the daughters of this sister, and one, the daughter of my mother’s younger beloved sister who passed away two Mother’s Day ago, with Alzheimer’s.

Together we leafed through old black and white photographs. Since they were raised in the Philippines and I was born here, my cousins knew so many details of the family’s life that I did not. Our bedside visit became a story telling session of our family’s past.

We pick up a photo of our grandmother. She is dressed in her best Filipino embroidered gown, a “terno”. Her waistlength grey hair is wrapped in her signature bun on top of her head. On the back of the photo in her very best writing, she writes this:

This picture was taken in inside the house with my appliances. 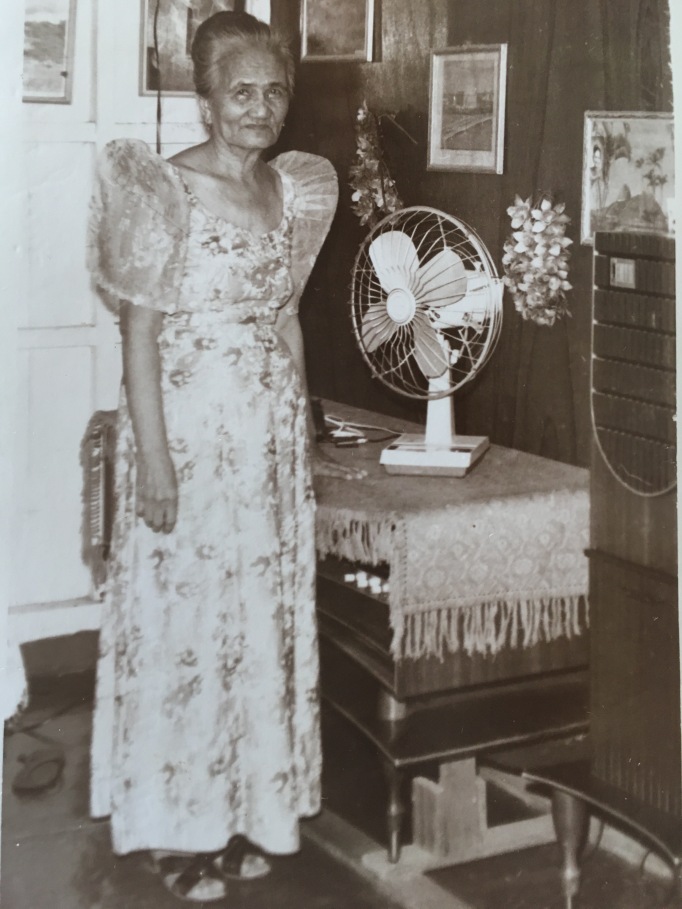 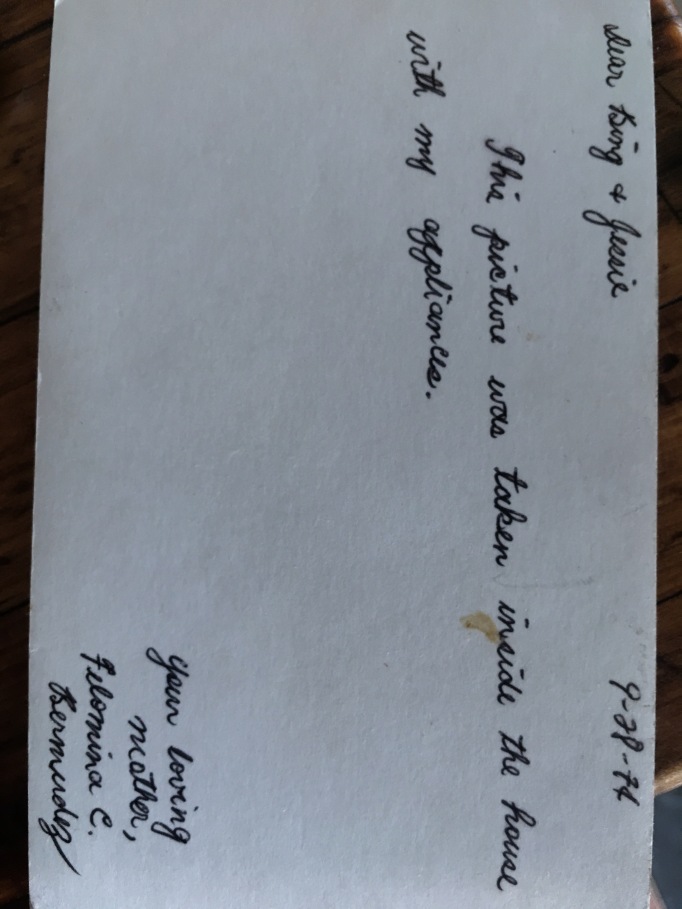 My cousin Carina explains to me that our grandmother was the queen of the province where she lived in the remote farmland of the Philippines. She was the only one with electricity, with appliances- an electric fan, a refrigerator, a radio, a television. Carina remembers the neighbors peeking into the window of the concrete block house, the biggest one on the street, to get a glimpse of the television working, a novelty back in the 1970’s.

My father would send his mother money to purchase these appliances from his meager salary as a food service worker at the Veteran’s Hospital. He was a veteran himself, 24 years in the US Army, a retired sergeant who had risked his life as Philippine Scout to escape from the Bataan Death March in World War II. My father, an enlisted man who fought on the front lines of the Korean War, would be so proud to know that Carinas’ sons now serve as officers in the US Army and Air Force, one as a major and one as a lieutenant as well as other cousin’s son, one who bears his name, Bermudez, a major in the Army.

These sons of Carina were taught by my mother how to read. They had just come to this country, and I remember my mother, a former third grade teacher, sitting on the couch reading our favorite children’s books, Where the Wild things Are and Curious George to these sons who are now officers serving our country.
Carina leans over the bed to my mother. She whispers, “Thank you, Tita Bing, thank you for teaching my sons to read. Thank you for all you have done for us to have a good life in this country.” 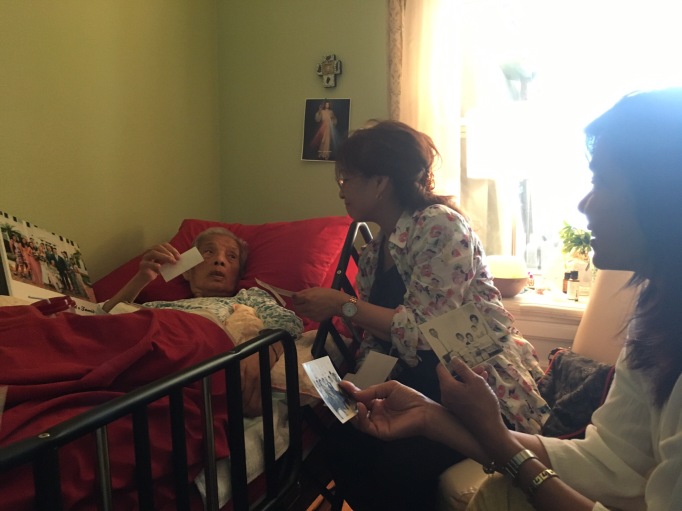 Carina’s sister, Marlene, turns to me. “I don’t like seeing your mom like this,” she cries. “She is the strong one, she is the one who did everything for us. She is the one who would make our favorite food and we would all eat at her house. Her house was the gathering place for us.”

Her mother sits quietly by mom’s beside.  There are no words between them, only a smile and grasping of hands

We pick up a photo of our mother’s mother. Veiled and stoic, hosting the same eyes and my mother, she is receiving an award from their priest at their parish.  I know this now because my cousin reads out loud the back of the photograph written in Tagalog in my grandmother’s handwriting.  At the end of the paragraph she signs in script, “Ina”.

“What does that mean?” I ask Carina.

Yesterday, the day we celebrate mothers, the great granddaughter of these grandmothers who lived in provinces in a country  10,000 miles away hosted a Mother’s Day Filipino Brunch in honor of these mothers.  She prepared food native to our country in a city, Seattle, known for its foodies. Her heritage menu  was promoted in a local magazine as one of the Nine Best Mother’s Day 2017 Brunches in Seattle. 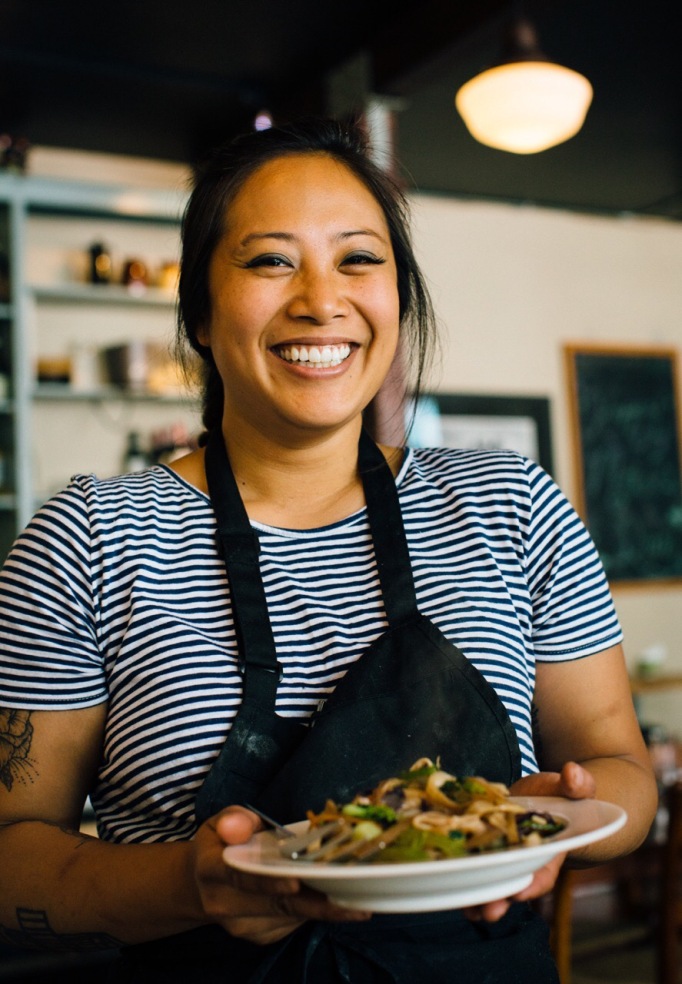 As the circle of mothers and daughters extend further out so does the gathering around the table, not only including family, extending to guests.  The tradition of welcoming and gathering with food and laughter ripples out  through the generations. 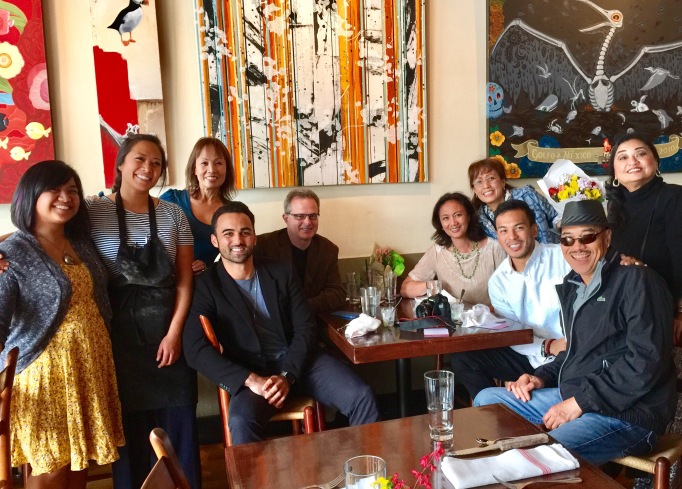 The center of this outward circle is not forgotten

My cousin Grace leans over to say good bye with tears and words of gratefulness for all my mother has done.

“Thank you Tita, for bringing my family here, for taking care of us, for giving us the chance fo a new life here.  We love you Tita Bing.”

The cousins gather around her to sing a song, a Filipino love song that was the favorite of my mother and father.  Although the names of my cousins are barely recalled, the words of this beloved song are not forgotten.

Ang lahat sa buhay ko’y (Everything in my life is)

Dahil sa’yo (Because of you)