Today would be my parents 60th wedding anniversary.

The influence of my parent’s marriage was shaped by the events at Pearl Harbor commemorated only a few days ago.

For their life as a couple brought together in the Philippines after WWII and their dream of establishing life in America have impacted not only my family but generations to follow.

Their sacrifice opened the door of opportunity for others to come.

To establish a dream come true.

Their first date was in a theater in Manila watching the American Film, “An Affair to Remember”.

They watched the iconic images of American life flash by on the big screen.. the polished kitchen beautiful furniture, lovely clothes, big automobiles.

My father turned to her and asked, “Would you like to have a good life In America?”

She turned to him and answered,  “Yes.”

Six weeks later they wed in a civil service ceremony before he returned to the United States after a four week leave as a sergeant in the US Army.

This is their only photograph.

The union of two lives impacted by historic events

opened the door of destiny for generations to follow.

Three days ago I attended the 78thanniversary of the Pearl Harbor Memorial. Every year my father would announce on December 7, “Today is Pearl Harbor Day”.

I sat among those who had survived Pearl Harbor, the event that changed the course of history for the world. For my family.

I sat next to a woman wearing a lei, nestled in a red wheelchair just like the one I had pushed my mother in for years.  Her crown of grey hair, the way she lifted her chin to smile reminded me of my mother who I lost only months ago

Her name was Elsie.

She came as an invited guest here, a Pearl Harbor survivor. Her sister Matilde was only 12 years old when shrapnel from a bombing hit her in the chest and killed her.  She was standing on the steps of her house that morning, the morning Elsie remembers hearing the planes flying overhead.  She has never heard and will never forget that sound she said.

The first wave of planes had already bombed the harbor. Her father was on the way to help.  She and her mother were scavenging the house looking for emergency materials, s that could possibly be of any help on base when the second wave occurred of bombing occurred

Her mother cradled her sister in her arms.  Her sister only one year older than her.  They did not tell their father until that night when he returned home, after the longest day of his life, coming to the aid and rescue of those injured at Pearl harbor. He came home to find his daughter killed by the shrapnel of an errant missile. 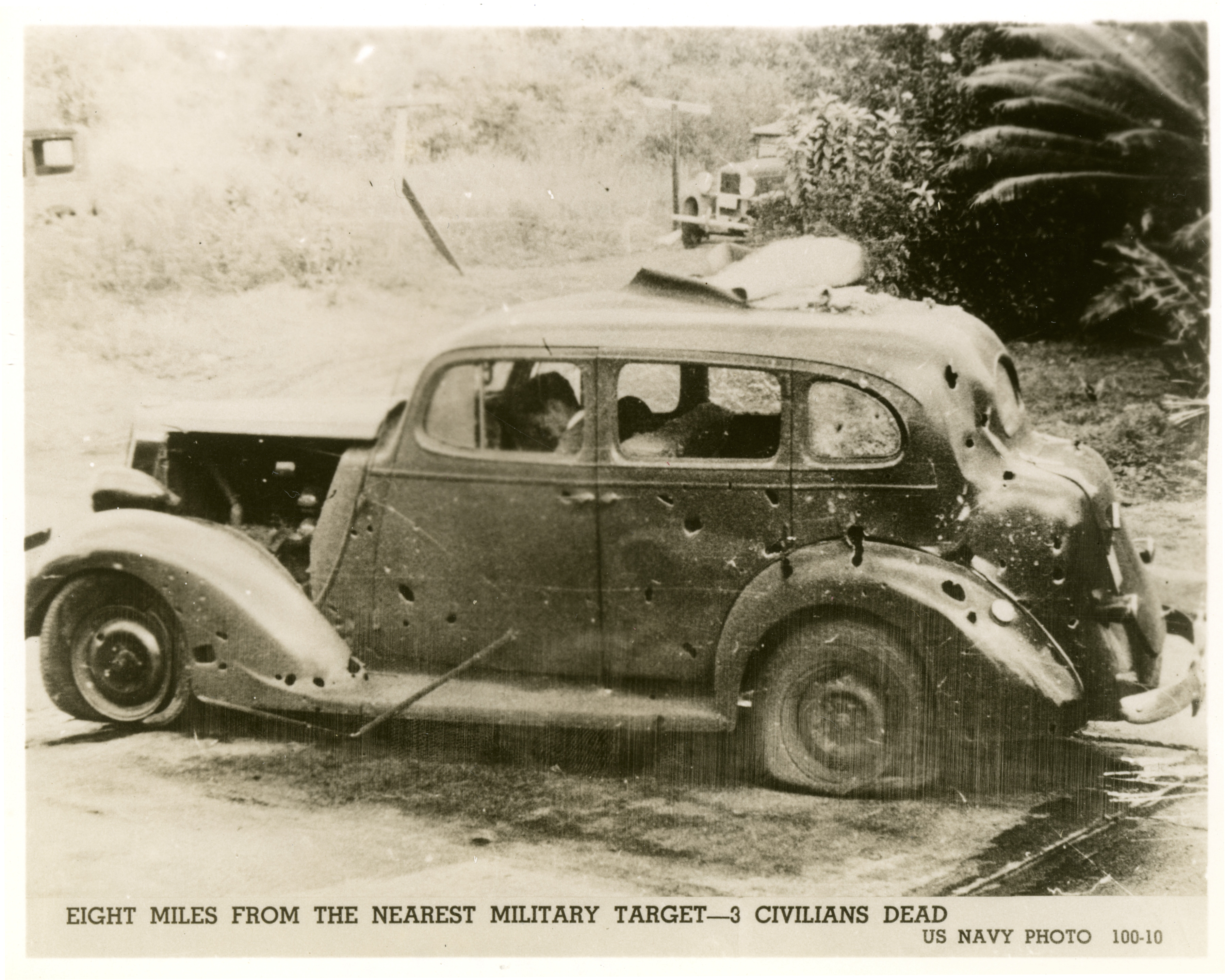 from ww2online.com HAWAIIAN CIVILIANS KILLED IN CAR DURING ATTACK ON PEARL HARBOR ON 7 DECEMBER 1941

My father was on another island hundreds of miles away in the Philippines.  Hours later his life was impacted by the events initiated at Pearl Harbor, the act that precipitated US involvement in World War II.  Behind the M1 Carbines in the bunkers of Fort Stotsenberg he would hear the same drone of the Japanese Zero planes over head, catching another fleet of US Army unprepared for the bombing overhead.

The crippling of the American Fleet in Pearl Harbor and hours later on Clark Air base in the Philippines marked the beginning of the end for the troops on ground to fight in the jungles of Bataan, just south of Manila.  My father fought in bunkers and jungles alongside American soldiers from December through April 9.  One day after Easter. But the day that marks spiritual freedom for others became the remained 75,000 exhausted and emaciated soldiers last day of freedom.  American troops surrendered to the Japanese the next day, for, as their leader spoke,  there is only so much a man can endure.  These men have endured all past endurance

Miles from here another 12-year old, my mother, took her toddler brother by the hand, and walked with him sixty miles from her province towards Manila.  Her brothers had been tortured by Japanese soldiers, one brother, a priest, killed, accused of being a spy.  She fled on foot to safety with the crowds of others moving towards Manila

Meanwhile my father had escaped the line of troops captured by the Japanese.  Slipping into a rice paddy face down into the water he lay prone for hours until the troops passes.  Shaking from malaria and emaciated from the previous months with no food supplies, my father made his way  on foot to his mother’s nipa hut in the province.  He recovered there until the troops barreled by in trucks to return to his unit at the end of the war.  For his service he was awarded US Citizenship. 75 years later he would be awarded the Gold Congressional Medal of Honor.

from Historynet.com “A Dreadful Step” 2010

These acts of bravery determination and endurance have passed on into our lifebloodas their children, grandchildren, nieces and nephews carry on.

Children of his nieces and nephews who first stayed with my parents in their split-level suburban home have gone on to serve the United States. One is a Major in the air force,  one a Lieutenant Colonel in the army, one a Captain in the air force.  My father, an enlisted man  would beam with pride that his name lives on in an officer’s uniform.

“The fact that we are here today citizens and friends of the greatest land on earth is a  manifestation of the immeasurable debt we owe to them and to those who wear the cloth that defends us now.  The greatest generation underlined a pivotal role that we may enjoy the freedoms we enjoy today for boldly defending America in her time of greatest need.” Ambassador Harry Harris,US Ambassador to Korea at the Pearl Harbor Ceremony

The greatest generation paved the way for generations to follow

This week my cousin’s daughter will open a restaurant in Seattle.

Her mother remembers receiving airmail letters postmarked from America.  When she was 12 years old she would hurriedly bring the letter to her mother to open. Spilling out of the envelope would be black and white photographs of my sister and I in matching outfits in front of our split level yellow house, and in neat cursive handwriting scripted by my mother stories about our life in America.

A decade later my cousin would sit in the kitchen of the home she only dreamed about in photographs, discussing with my mother as she cooked over the stove the possibilities open for her life in America.

Third generation cousins born in America with Melissa Miranda and her father, Musang

and the same kitchen where her grand aunt first served the lumpia shanghai she serves on platters this opening night.

It is the same kitchen where her own mother sat at the countertop, listening to the advice of her granduncle, my father, the one who signed the affidavit of support for her to come to the United States.  The one who fought in the jungles of Bataan.  The one who always remembered Pearl Harbor Day.

The dream was always of a better life.

My father would fight so that one day he would have opportunity in America. Generations behind him would also find opportunity.

Nearly eight decades after his fight

his grandniece stands on the floor of a newly refurbished restaurant, with four generations that represent his family

His brother and wife, my mother’s sister, the first generation to join my parents.

The second generation of cousins emigrating to America.

The third of those born in America.

And the fourth, those born to them,

stand together on the threshold of a dream,

a dream that carries on the power of family

and grit through the obstacles.

A dream built from a family raising each other.

Raising each other up to be their best.

Being there for one another.

Having each other’s backs, even after backs have been broken

to complete the construction of a vision

that carries on all that really matters: