I rise above on metal wings.

Rise above this broken earth
Fractured and shattered.
The craft moves upward

Away from anger, pain and protest

Grief, and forgetting, my mother’s disease.
Pulled into the greys of heaven

clouds and mist and vapor.
Behind it trails the dawn

The beginning of a new day

The gradual warming of earth’s tent

From greys to pinks to orange.
We soar along horizon’s line

Away from dawn, westward

from here the daunting now appears

The blue of waters reflect the blue of skies above

A layer of mist hovering between
Above the blue

As if a heavenly artist took one stroke

One brush of his hand

In vapor, in white on a blue canvas sea. 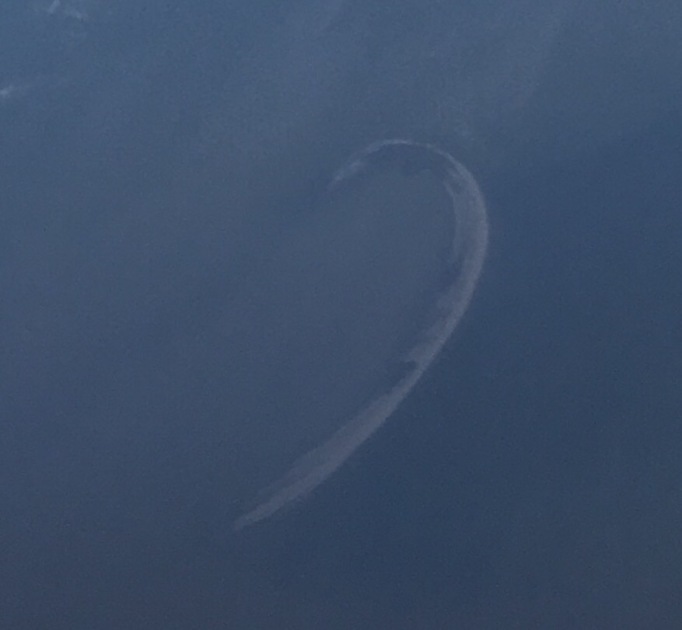 What message does this half a heart bear?

Or is the remnant of a broken heart? Half empty from grief and pain and sorrow?
The half heart remains floating above the gulf waters.  A message in the sky.

The remaining journey attempts to answer that question.

On this journey across the country I see the remnants, the attempts for us to be like God, constructing our own universe, power, the windmills the towns laid out in perfect grids, the farmland, from the sky, perfect circles. The network of connection of roads and highways sometimes singular across a vast nothing, sometimes a puzzle of roadways. All connectors. All looking for connection. The towers reaching to the sky to send signals. The skyscrapers stair stepping upward. 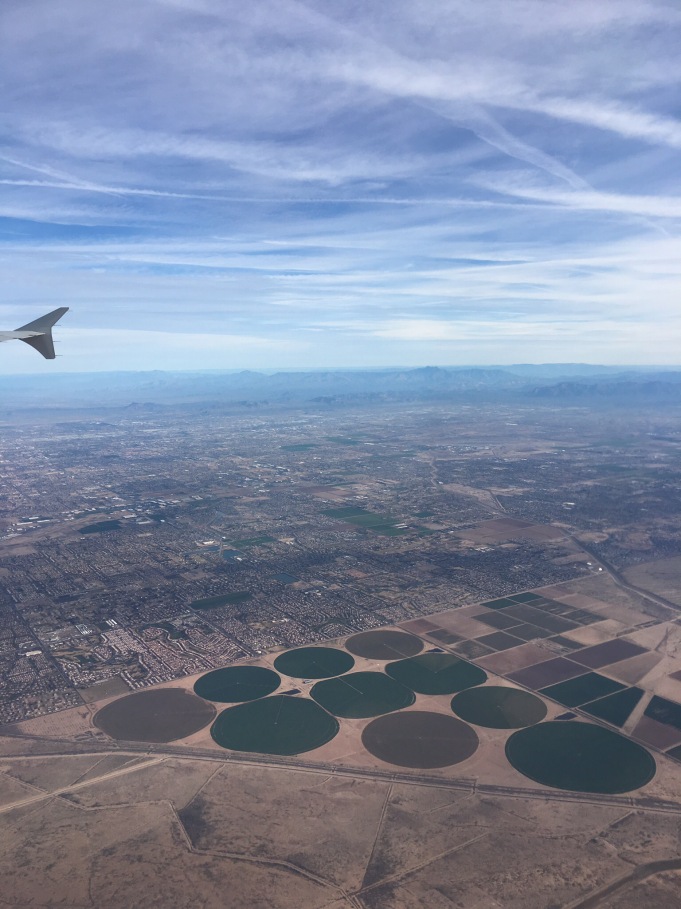 Beyond the cities and towns, a single peak, snow capped, tapping heaven, then sloping down into a valley that breaks out into a river, then a canyon, then a desert. This vastness that is this land. The land our forefathers traversed at first by foot or horseback centuries ago. The land our forefathers traversed in search of a new life and new horizon. This country of promise.

My father came to this country, decades ago, standing on the deck of a freighter. He earned his entrance into America fighting on foreign soil, a soldier in the Philippine Scouts during WWII. He survived the Bataan Death March. He survived the Korean War.
As he approached the port of entry spanned by the Golden Gate Bridge, he spoke to his young daughter, my sister, of the promise of this land, of the promise of America. “We will have a good life here in America,” he said to her as they crossed underneath the great orange arches.
My plane lands a few hours south of where my father first entered this country, Monterey Bay, where a Filipino taxi driver takes me to my hotel. He is from the same area in the Philippines as my father. He speaks his language. He has been in this country 17 years. He speaks proudly of his daughter, who is going to college. He has my father’s dream, that his children get a degree. He has my father’s name. Jessie.
I see my father’s face in the ones of those who work here at the hotel. My father, who was a laborer after his 24 years of service as a sergeant in the US Army. My father who could could only dream of staying at a seaside resort. My father who labored so his children could dream.
Over the waters the next morning, perhaps one hundred miles south of the port my father first entered this country over sixty years ago a rainbow reaches from end to end. Not just one, but two. A double rainbow over the grey blue pacific waters.

Promise. The rainbow.
These days it can mean so many things

But originally the bow

Was set in the clouds as a promise

That God would never flood the earth again

Despite our turning away.

To start a new life in the land of promise.

I will care for her

And the memories she can no longer recall

Of a life, a home, a car, a family started here in this country.
I will care for my father’s grandchildren
The ones who now live the life he only dreamed of

Who carry degrees from universities and live in cities and towers from coast to coast.

Who  pursue education and the hope of helping others in a world that greatly needs help.

And as my mother fades she too will join him.

Who live out the promise they began

But not half hearted.

2 thoughts on “Message in the Sky”