FACE:
1face noun, often attributive \ˈfās\
: the front part of the head that has the eyes, nose, and mouth on it
: a facial expression
: the way something appears when it is first seen or thought about

When it is dark, and early in the morning, first impressions may not always be accurate. That was true the morning I boarded a bus at 5 a.m. for a four-hour journey to Tallahassee, the state capitol, with 20 strangers, all caregivers like myself, to lobby for the Alzheimer’s Disease Initiative, a bill to assist full-time caregivers with respite care. Caregiving takes its toll, and as I glanced at each face boarding that early morning, I wondered what story brought each one on the bus that day.

As light broke that morning, so did conversation begin to break among strangers, and I began to speak with the woman behind me, Miss Margaret, a soft spoken woman with a warm smile. I asked her who she cared for, and she told me her husband, Mr. Willie. The lilt of her voice and demeanor reflected the love and loyalty she felt for Mr. Willie, but the tears forming after a few words revealed the weariness of her burden. After his stroke last summer she has been caring for him full time, as well as pastoring a church near Daytona Beach. His recovery from his stroke has been slow; often he is tired, and it is difficult for him to get around. Still he comes with her to the church. When he tires, he just lays down on the pew and takes a rest. The congregation understands; it’s just Mr Willie.

Rest. Rest is something Miss Margaret herself needed. But sometimes it is too much of a burden to get that rest. To be able to go on this day trip, Miss Margaret had to make arrangements at a local respite care home, get Mr. Willie up at 3 am to bring him there for the day. She fretted about getting home late that night to pick up Mr. Willie then bring him home at midnight. I suggested to her to just let him sleep there for the evening so she could get a good night’s sleep. With her sweet smile she replied, no, I’ll worry to much that he will be restless. I’ll just bring him home.

Yet they carry on each day, many with a smile on their face that hides their pain.

Tony is one on the bus with a big smile on his face. His eyes even smile beneath his white brow and hair. I ask him, does your loved one have Alzheimer’s. With a big, crooked smile and a twinkle in his eye he answers with utmost sincerity: From the tip of the hairs on her head to the tips of her toes she had everything wrong with her. She suffered with diabetes, had breast cancer, had open heart surgery, and in the end suffered with dementia. Plainly, he says, she was dealt a bad card. As he looks me straight in the eye, with that same twinkling smile, he tells me he cared for her with his whole heart, and if he had to do it again, he would. They were married almost 50 years, and for 12 of them she was critically ill. Even though she passed, he has come to Tallahassee to advocate for funding for caregivers for the past four years. 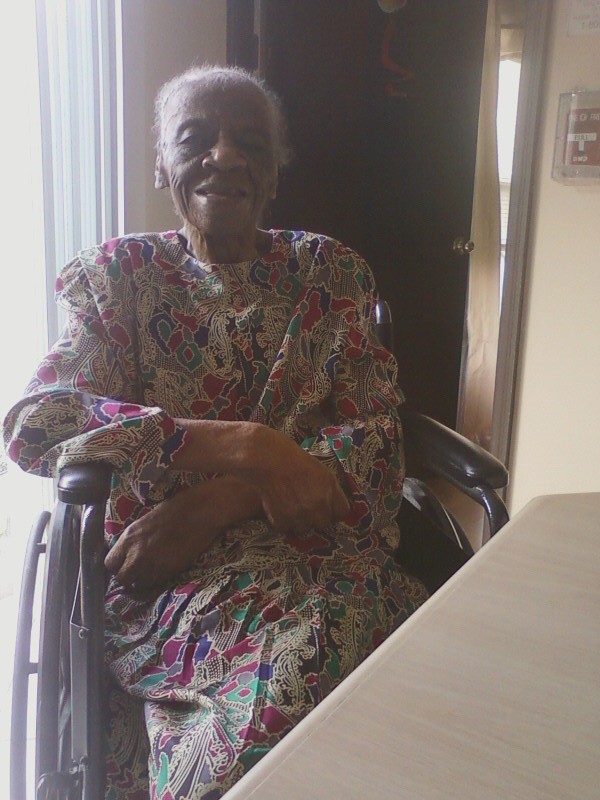 I had watched a smartly dressed woman wheel her grandmother to the bus. Hunched over from osteoporosis, the grandmother gingerly took each step up the bus as the young woman assisted. At lunch I sit next to them, and find out that the young woman, Sherri, has been caring for her 94-year-old grandmother for the past 10 years, after her grandmother helped Sherri care for her mother. Since she was 20, Sheri’s mother had suffered with MS, but it was colon cancer that took her life 10 years ago. Sherri was her mother’s miracle. Her memories of her mother include her fight and resolve against MS then cancer. Sherri reflects her mother’s passion as she now cares for her grandmother, even now, living with her two weeks after her honeymoon with “the one that got away”…the high school sweetheart she married 20 years later.

These are the faces of caregivers, the ones who care for those who loved them. The ones who take their loved ones into their homes. They are retired. They are working. They have new lives. They are selfless and giving. They are tired.

Their weariness does not prevent them from the four hour bus ride to Tallahassee or the six hour walk through various offices of the capitol to show their support for the Alzheimer’s Disease Initiative, ADI, a $4.2 million proposal by Florida Governor Rick Scott to assist caregivers in respite care. The proposal will help caregivers on a sliding scale with needed respite care so they continue their jobs or even have a break to complete necessary tasks while caring for their loved one.

Our band of 20, dressed in t-shirts that say “Who Cares?….We do!” have appointments scheduled to meet with legislators to ask for their support for this bill. As we move through different office and meet the legislators, we surprisingly find this truth: that many have their own brushes with Alzheimer’s in their own families, their own stories to tell. 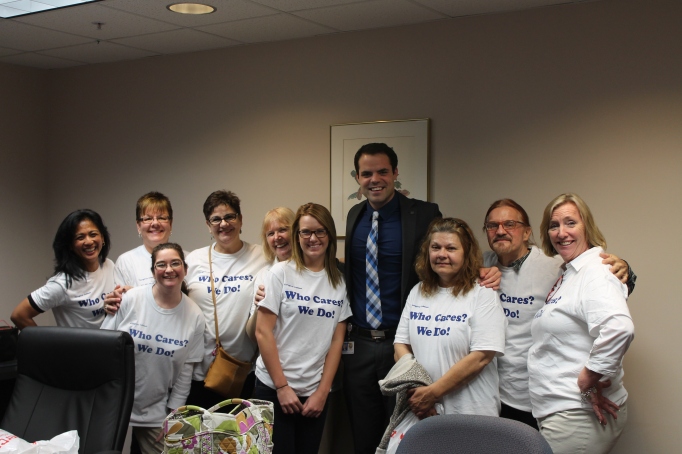 The face of Alzheimer’s is increasingly prevalent in this society, as the incidence of Alzheimer’s occurs in 5.3 million lives today. The need for support in its many facets: respite, counseling, funding, supplies, daycare……continues to grow. Behind these numbers are the faces of the ones who care, the ones who get lost behind the research and the funding and the cures opposed to the day to day living with this disease.

It is the faces that need to be remembered, as Representative Mark Pafford reminded us last fall at a Caregivers Forum.

“We as legislators lobby for these funds for respite care. But your presence here puts a face to the funds we lobby for. Your faces here make this real and personal.”

The faces of caregivers. They are real. They are resolved. And they each tell a story that someday may be your own.

4 thoughts on “the faces of caregiving”